The signatory of these notes is the choreographer Walter Gore, who in one instance also signed on behalf of his wife, the ballerina Paula Hinton. They were written while touring the Australian Theatre Ballet in Victoria and South Australia.

The references to “nags … over Mitch”, the “ABS” and the “Society” relates to the Australian Ballet Society, under whose auspices Gore and Hinton co-founded the Australian Theatre Ballet, in January 1955, and which was the overseeing body regulating matters concerning Gore’s company.

In relaying issues about “E” and “Perth”, it is not clear to whom exactly Gore was referring. The fact that the letter cards were addressed to Barry Kay c/o His Majesty’s Theatre, Perth, and his apparent pledge to help – since he seemed to have been confronted with resolving complications there himself – may allow to infer that Gore also experienced difficulties with the same theatre. It can therefore only be assumed that administrative problems related to “Perth & the ABS not moving fast enough” caused the Gores to give notice prematurely – hence their reason for fearing the severe penalties mentioned.

It seems obvious that Gore and Kay have been quite chummy with each other, so much so, that the former felt confident to disclose to the latter circumstances of such sensitive and contentious nature.

Barry Kay preserved Walter Gore’s correspondence throughout his life, and it is believed that he did so, as it not only represents part of his working relationship with Gore, but also exposes precarious and precipitous information, possibly constituting a significant document in Australian ballet history. 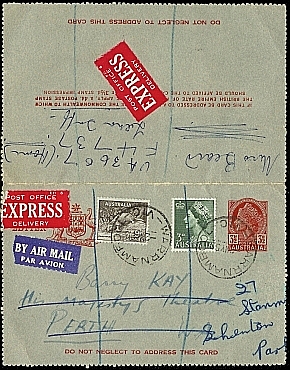 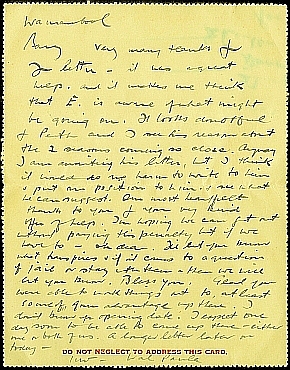 very many thanks for the letter – it was a great help, and it matters we think that E. is aware of what might be going on. It looks doubtful + Perth and I see his reason about the 2 seasons coming so close. Anyway I am awaiting his letter, but I think it would do me harm to write to him + put our position to him + see what he can suggest. Our most heartfelt thanks to you and your very kind offer of help. I’m hoping we can get out without paying this penalty but if we have to – oh dear. I’ll let you know what transpires + if it comes to a question of jail or stay with them – then we will let you know. Bless you. Glad you were able to mouth things out to, at least some of, your advantage up there. I don’t know the opening date. I expect one day soon to be able to come up there – either one or both of us. A longer letter later on today – 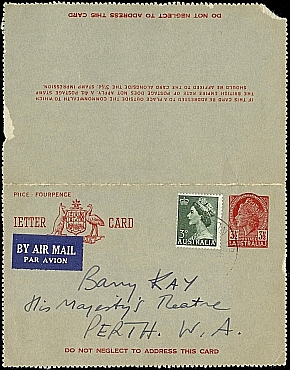 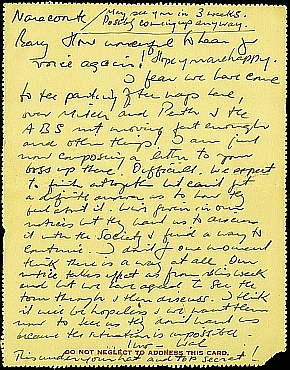 May see you in 3 weeks. Possibly coming up anyway. How wonderful to hear your voice again! Hope you are happy.

I fear we have come to the parting after nags here, over Mitch and Perth & the ABS not moving fast enough and other things! I am just now composing a letter to your boss up there. Difficult. We expect to finish altogether but can’t get a definite answer as to how they feel about it. We’ve given in our notices but they want us to discuss it with the Society & find a way to continue. I don’t for one moment think there is a way at all. Our notice takes effect as from this week and that we have agreed to see the tour through & then discuss. I think it will be hopeless & we want them now to tell us they don’t want us because the situation is impossible.

This under your hat and TOP secret!