These examples of logged accounts of intangible heritage and oral history constitute a followup to the previous page. They represent only a fraction of the range of this type of specimens held at the Archive. A number of images and text passages displayed on other pages have been assembled here for the purpose of demonstration.

Arnold Wengrow, Professor Emeritus of Drama at the University of North Carolina, Asheville, came to visit the Archive and was immensely impressed and captivated by Barry Kay’s vast output of preliminary scribbles, sketches and drawings for both costumes and sets. Wengrow was simply enraptured by their salient details. He pointed out that these graphics are of the utmost importance in documenting hard-fact evidence of the comprehensive, creative approaches in designing for the theatre. Because they so strikingly elucidate individual, gradual design processes and progressions leading to final works of art, they are of lasting value, particularly given that their realization on stage is destined to be ephemeral. 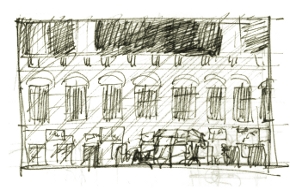 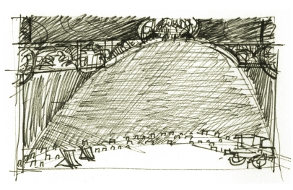 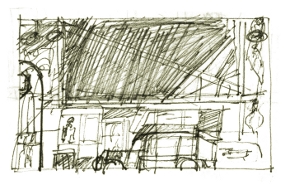 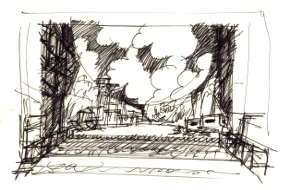 Unless initial design phases are revealed in one form or another, the observer of a theatre performance is inevitably excluded from gaining insight into these unique processes. Viewing final drawings and maquettes close up at exhibitions or museums and, on rare occasions, also comparing costume and artifact designs with exhibits of their life-size analogues used on stage, may to a degree compensate for the lack of such insight. But still, this is not the complete story. 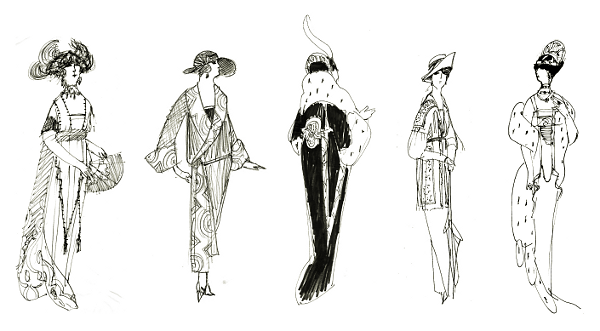 By illuminating the mechanics of designing for the performing arts generally, and by highlighting special tasks that Kay undertook, including events that occurred in the course of his work, we are unveiling the extent to which he pursued ideal design solutions. While discussing potential possibilities with director-producers, it was not unusual for him to scribble an initial spontaneous idea onto anything near, be it a paper serviette, the back of a restaurant’s menu or even a matchbox. Tracking usually undisclosed visual as well as documentary evidence of the design succession from this point of origin, all the way to the final composition, thereby retrieving information about the elusive, intangible, ephemeral nature of designing, allows us to reconstruct enduring, tangible records.

In working closely together on the ballet Métaboles, the influence the choreographer, Kenneth MacMillan, and the designer, Barry Kay, had on one another, in terms of constructive impulses and ideas, unexpectedly resulted in midstream changes that affected the direction of their respective creative processes. 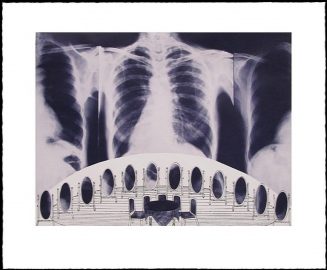 Based on MacMillan’s intentions for Métaboles, a surreal, bizarre ballet without a specific period setting, Kay created the sets and costume designs. In the course of concurrently implementing their respective ideas, and while the choreography was still in the process of its creation, it so happened that, ultimately, Kay’s set design inspired MacMillan to change part of his choreography. This again required Kay to abandon his abstract costume designs for the male dancers and instead consider dressing them in balance with the changed nature of the ballet.

Subsequently, they both agreed on a plain but elegant outfit for the single female role, corresponding with the formal attire of black tails for the gentlemen, fashionable between 1910 and 1920, including matching ancillary apparel and coiffures.

Events preceding the building of a maquette

Barry Kay was a convinced believer in making use of the entire three-dimensional stage space and in getting sets off the ground to provide for maximum area of action. Following many preliminary drawings for the set design of the ballet Solitaire, he hit upon the idea of exploring the feasibility of an inflatable on a grand scale: a huge transparent tree as a centrally dominating, space-spanning structure.

The only way of accomplishing this was to use flexible, thermally welded PVC (polyvinyl chloride) sheeting. But how could this ever be rendered durably in a model on a scale of 1:25? The tree would have to be constructed from individual components made of some kind of rigid material. Yet at that time, there did not seem to exist the technology of forming such small, irregular bulbous shapes made of a synthetic compound as Kay needed them; even if it had existed, the costs of producing only a small number of components would have been prohibitive.

Many debates between Kay and his assistant eventually resulted in the decision to construct the tree from glass or plexiglass modules assembled around a transparent acrylic trunk. Commercially available products, however, posed the next problem. They were solid, thus too heavy, their shapes too uniform and, due to their limited sizes, too restricting for the purpose of building the model. It became clear that the modules would need to be hollow and thin-walled. What now?

The solution to overcoming the difficulties finally rested with a glassblower in Exeter, Devonshire. Here, individual segments were mouthblown by the gaffer himself in different sizes according to Kay’s on-the-spot directions. Back at his studio, the bulbous glass spheres were assembled into the tree and, after its completion, appliquéd with colourized paper cut-outs of photocopied antique engravings of foliage.

Today, the model for Solitaire is preserved at the Victoria & Albert Museum, Theatre and Performance Collection.

This example of oral history is based on a direct speech recording excerpted from audiovisual material and demonstrates how intangible heritage is rendered tangible by transcribing it into a lasting hardcopy account.

In his pursuit of pioneering three-dimensional sets design for the ballet, Barry Kay achieved his greatest breakthrough on a large scale with his opulent and sumptuous designs for the ballet The Sleeping Beauty at the Deutsche Oper Berlin – but not without obstacles. 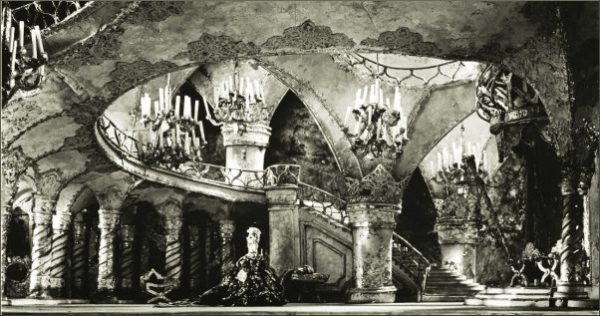 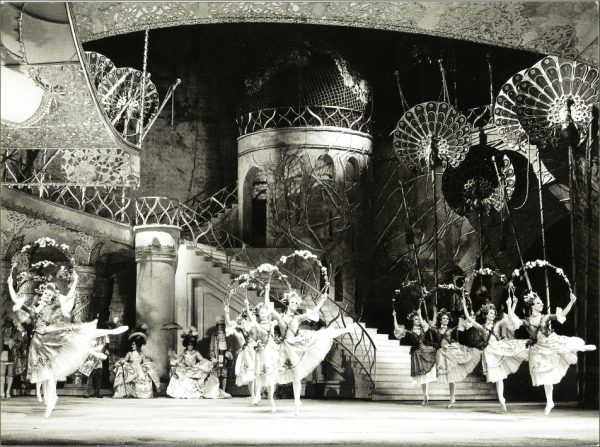 “When I began designing for the ballet in England there was a tendency to make only a painted backcloth and wings – very simple sets, really. Anything that would be constructed in the way of sets in the theatre would be considered suitable for either operas or plays, but never for the ballet. And that is one of the first things I really questioned: Using the ballet as a means of being able to make very quick changes in the repertory from opera to ballet. It was convenient that the ballet did not have any substantial sets; it was really the poor cousin. It was not easy to make that change acceptable for the opera houses without having to fight… and I remember the intendant of the Deutsche Oper Berlin saying when he first saw the model [for The Sleeping Beauty]: «This is Metro-Goldwyn-Mayer.» And Kenneth [MacMillan], who was at the meeting, said: «Yes, that is exactly what we are trying to do.»”

Because of the phenomenal costs involved in staging sets of such magnitude, never expended on a ballet before, the opera house administration thought it totally unrealistic to even entertain the idea of such a production. It took Kay and MacMillan quite a lot of convincing and persuading but, in the end, the funds were raised after all and the production did go ahead as planned.

The special way of constructing chandeliers, Kay’s brainchild, such as he designed for the ballet Raymonda, Act III, poses an interesting technical design issue. 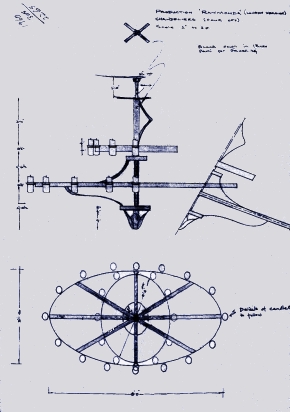 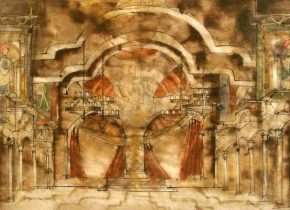 In order to avoid likely interferences, specifically collisions, in the overhead flies, Kay had to devise the chandeliers in such way that they fitted into the narrow interstices between borders and drops. So instead of designing customarily circular chandeliers, he opted for an elliptical shape. He reasoned that a circle viewed in perspective from the auditorium always registers as an ellipse. As the human brain adjusts for these variations and the observer does not perceive them, Kay concluded that the difference would never be noticeable.

Since experience proved him right, and the use of elliptical chandeliers was in fact most effective, which also allowed for more expeditious scene changes, he adopted this method of construction for the chandeliers he created for The Sleeping Beauty in Berlin, 1967.

Our successful collaboration with a commercial enterprise, Rei Kawakubo’s distinguished Japanese couture house Comme des Garçons, exemplifies how stage design can be reanimated in a different and innovative way many years past its staging.

Comme des Garçons’ London advertising agency had already earmarked designs by Ralph Koltai to accentuate their mailer of the 2005 spring collection when, at the last minute, they turned to us, having come across our website, and found Barry Kay’s designs superiorly suited to their purpose. 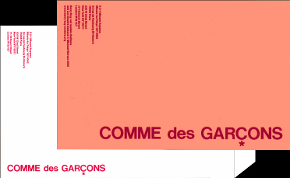 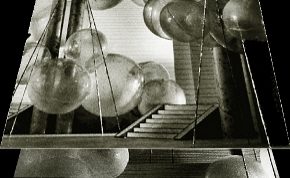 We chose one image each of Kay’s maquettes for two ballets: Les Quatre Saisons and Solitaire. These images, printed in Japan on semi-translucent, silver-coated parchment in poster format and elegantly packaged, accompanied by other promotional material, were distributed to a specially selected international clientele. 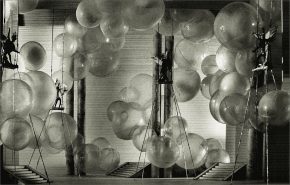 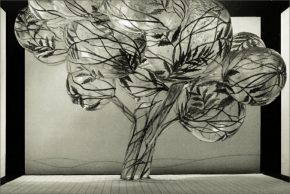 Contrary to passively viewing sets designs, as one would typically do by watching a stage performance or by browsing through an illustrated book, in unwrapping, unfolding and handling these posters, and by holding them up against the light and deciding how they could be put to further use, they become the object of interaction with the observer, who is thus motivated to be proactive and autonomously creative.