Clement Crisp is the ballet critic of the Financial Times, London.

Clement Crisp reflects on Barry Kay’s designs for the theatre

In writing about Barry Kay, who had designed so many ballets for him, Sir Kenneth MacMillan paid tribute to ‘a sensitivity, perception and wealth of ideas’ that made Kay an asset to the theatre. Not merely to the ballet, but to the opera and drama, which he also decorated with such distinction, for Kay was essentially an artist able to give savour to every form of theatrical expression. But it was in ballet that his gifts were pre-eminently effective, for he knew how to create costumes which showed a respect for both the choreography and any historical period, and his settings provided what may be called a poetic reality to frame the dance.

He made his debut as a designer in his native Australia, working with the choreographer Walter Gore, travelled to Europe to study and then to make London his base for the following three decades of eloquent work. His first success came with the sets and costumes for Peter Darrell’s The Prisoners, an enduringly powerful piece made for Western Theatre Ballet, whose grimness Kay conveyed in starkly effective terms. For Darrell he also designed Chiaroscuro and Salade with a lively wit, and soon after began his long association with Kenneth MacMillan, decorating Images of Love, which formed part of the The Royal Ballet’s Shakespeare celebration at Covent Garden in 1964, with a gleaming golden structure that still lives in the memory. The stature of his talent was, I think, fully revealed in The Sleeping Beauty which he designed for Kenneth MacMillan’s Berlin staging in 1967, and in MacMillan’s one-act version Anastasia in Berlin in the same year, later to expand into a full-length work for The Royal Ballet. The historical period of Beauty was brought forward so that its last act was set in the 1890’s, the decade of the ballet’s creation, and the staging was given an opulently Russian manner. Especially beautiful was the winter setting of the vision scene, with its sledges and furs, and the dazzling use of the Deutsche Oper’s revolving stage for the Prince’s journey with the Lilac Fairy. (And characteristic, too, Barry Kay’s amusement at having to kneel on the floor of the work-rooms to dress the two dwarves who were the attendants on Carabosse.)

The full-length Anastasia in 1971 must rank as one of the finest decorative achievements of Kay’s career and The Royal Ballet’s repertory. The use of a permanent setting of swirling parchment scrolls to establish the world both ‘real’ enough to take us in and out of Anastasia’s memories, was matched by costuming in the first two ‘Tsarist’ acts which has no rival in the company’s annals for theatrical beauty and historical effectiveness.

The eminent couturier Victor Stiebel was greatly admiring Kay’s skill and wit in suggesting, without aping, a golden age of couture. “That’s Callot Sœurs“, he said to me of one astounding dress for a danseuse: his fascination was shared by everyone who saw these ravishing clothes moving ravishingly with the dance. 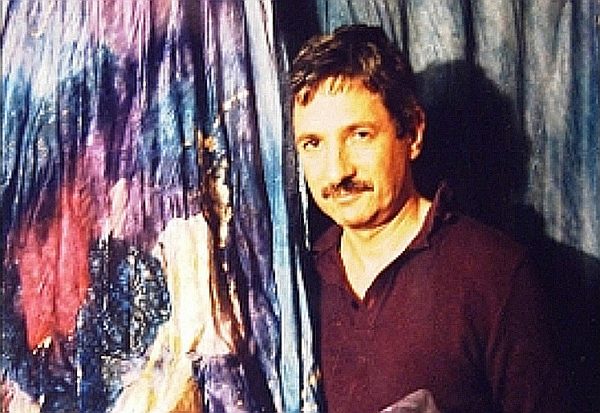 Barry Kay with the costume he designed for Laura Connor as Loïe Fuller performing the Butterfly Dance in the ballet Isadora
The Royal Ballet, London, 1981

Kay’s later Isadora for MacMillan at The Royal Ballet offered another example of decorative insights into the past: again he found a way of keeping a stage action fluid, and dressing the dance in a fashion both apt in period and vivid in dramatic impact. For Rudolf Nureyev he also provided two exceptional classic designs: The Australian Ballet’s Don Quixote finds an old balletic war-horse most handsomely caparisoned: The Royal Ballet’s Raymonda Act 3 is gleaming fantasy of romanesque arches and white and gold costuming whose splendid blaze is still applauded at every curtain-rise.

This, as much as anything, tells of great virtue of Barry Kay’s work: in theatricality and bravura effects he was never timid, never polite. The designs that he made for MacMillan’s The Four Seasons for the Paris Opera Ballet were exuberant, amused by the theatre and by conventions of the stage and the company, and hence slightly over the top in matter of decorative caprice.

For the Métaboles which he also decorated for the ‘Soirée MacMillan’ at The [Paris; ed] Opera, he produced designs both haunting and controlled, because both music and theme dictated it. Kenneth MacMillan summed up the rapport which Kay established with the elements of a ballet thus: ‘Not a lot needed to be said. He intuitively knew my aims: his response to the music was closely allied to mine and his set models and costume designs so clear and evocative that the task of choreographing was made easier’.

Barry Kay’s work for opera and drama seemed no less responsive, albeit the demands of these forms were less exigent of the ‘creative’ nature of his ability to work with a choreographer, and productions for the Aldeburgh Festival, The Royal Opera, The Old Vic, and The Royal Shakespeare Company, showed a notable sympathy for the play or opera in hand.

His eye for the socially pertinent and the unexpected – so valuable in his costume designs – was fascinated by the transvestite community of Sydney, whom he captured in a book of photographs.

Barry Kay died in 1985, and his death left the theatre – in all its branches – poorer.