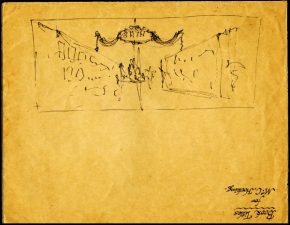 Décor for Bath Street, City of Bath, Somerset, England in celebration of the Bath Festival of the Arts, 1964 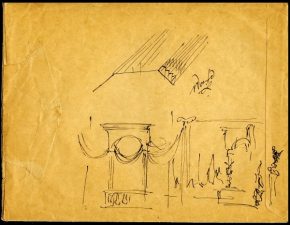 When Barry Kay designed Divertimento for Kenneth Macmillan, which was presented by Western Theatre Ballet at the Bath Festival of the Arts in June 1964, the festival’s artistic director, Yehudi Menuhin, appeared to have asked Kay to provide a street decoration to advertize the event.

As Kay’s sketches above bear no information as to their intended purpose, they were at first thought to represent design ideas for the festival ground entrance or perhaps the festival stage setting. The drawing featuring a banner, inscribed ‘Bath’, spanning across a street between two rows of receding buildings, may however allow to conclude that these are indeed the designs for a street décor. Yet, without definitive evidence it remains inconclusive whether the idea was ever realized. 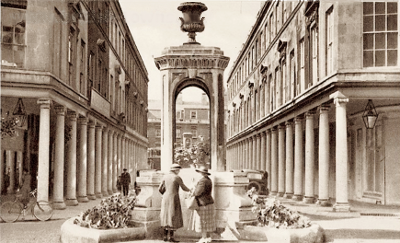 A 1930s picture postcard showing the mineral water fountain set against the Bath Street colonnades. In use until 1978, the fountain was relocated since to Bog Island at Terrace Walk, Bath.

Even so, the results of research – based on the configuration of buildings receding on either side and the monument-like structure, as depicted in the two sketches – do confirm that the object of Barry Kay’s design were the Bath Street colonnades with the mineral water fountain at the junction with Stall Street in the city centre of Bath, Somerset.

When discussing creative ideas with professionals, in demonstrating them Kay would often sketch his visions on anything nearby, be it a napkin, the back of a menu or a matchbox – in this case a used manila envelope that his impresario friend, Clifford Hocking, happened to have at hand.

In 2004, Hocking left the sketches as a gift to the Barry Kay Archive.