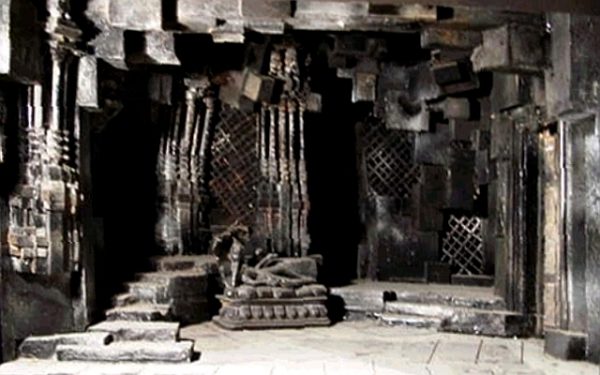 Scene setting: the interior of a Himalayan hill temple, a rock shrine and home of the god Brahma.

Story line:
Stranded in the Himalayas after their vehicle breaks down, four American tourists invade a shrine, the home of the god Brahma, where the statue of Vishnu reclines before a cluster of stone pillars and where Shiva dances eternally with Kali. Unimpressed, the tourists mock and get drunk but at last the feebler of the two men offers himself as a sacrifice to Kali, seats himself in the lap of Vishnu and receives enlightenment.

“Barry Kay has designed a magical set for Kindly Monkeys at the New Arts. Twin columns push up to the sky, an elephant god stands by the massy door with its huge knocker. A figure of Vishnu dominates the foreground, and at the back there is a golden platform where the Brahma of this Himalayan temple appears. The whole is tinged with a dark and glowing light of purple, dimmed bronze and ultramarine.”

“It is undeniably splendid: Barry Kay’s set for Brahma’s home in the Himalayan mountains is a dusky golden cavern where the calm figure of Vishnu gazes out from a background of writhing limbs, and a central doorway, like a heavenly lift-shaft, lights up for the visitations of Brahma.”