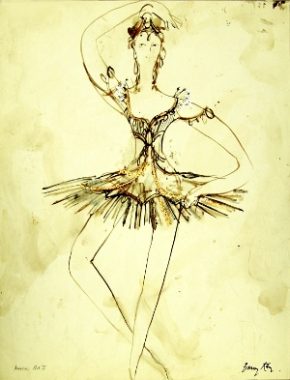 Prince, one of four costume drawing Barry Kay modelled his character costume designs for The Sleeping Beauty on the fashion in vogue at the Russian imperial court during the 18th and 19th centuries, which originated at the French court and subsequently at other European courts, who adopted the French style but also incorporated it into their own. He set the beginning of the ballet in the eras of the late Baroque and the Rococo. Princess Aurora’s awakening, following Prince Florimund’s kiss one hundred years later, advanced the action to the fashion period of eclecticism, known as Gründerstil in Germany, that had its counterpart in the style of the late-Victorian epoch. To accentuate the might and fierceness of the wicked fairy, Carabosse, Barry Kay devised a pair of cute Dwarf characters, a male and a female, as her attendants. According to oral history handed down by him, the dress fittings with the little people posed some unusual circumstances. He and the wardrobe staff of the Deutsche Oper Berlin very much enjoyed working with them, as much as they relished being the centre of attention when placed onto a cutting table to have their dresses fitted.