This synopsis was specially written for inclusion in the performance programme notes. Apart from adopting Czech characters in the transcript for some of the names, the authors’ spelling is retained throughout.

As told by Colin Graham and Barry Kay

Act I, scene 1
spring
The Forester takes a nap in the Forest on his way home. While he sleeps and dreams, a baby frog appears, among other animals, and is frightened by Sharpears, a vixen-cub. Escaping from this menace he jumps on the Forester’s nose. The Forester wakes up and seizes the unfortunate Sharpears and takes her home as a plaything for the children. The Drangon-fly and other animals return to look for the vanished vixen-cub.
Act I, scene 2
autumn
It is now autumn and Sharpears has grown up in the Forester’s yard by the Lake. She upbraids Lapák, the dog, who writes love songs for himself as there is no one else, for his servility to Man. Pepík, the Forester’s son, and his friend Frantik, come into the yard and tease Sharpears with a stick. She flies into a rage and bites Pepík. At his cries the Forester’s wife comes running and insists that the Forester shoot the beast. He replies by tying Sharpears up. Night falls and Sharpears, yearning for freedom, dreams that she is a human girl. In the morning the hens are ordered out to work by the arrogant Rooster and Sharpears takes the opportunity to incite the hens to rebellion against the Rooster and Man. When this has no effect she lures the inquisitive rooster to the woodpile where she has buried herself and promptly kills him and several hens. In the ensuing riot she bites through her rope and escapes to the Forest.
Act II, scene 1
summer
Sharpears provokes the Badger into vacating his hole to her, much to the delight of the Birds, and other animals who have turned out to welcome her home.
Act II, scene 2
The Forester teases the Schoolmaster in the Inn about his unrequited love for Terynka, a gipsy girl who also has too many attractions for the celibate Parson. When they retaliate by enquiring after the Forester’s pet fox, he sulks. The Schoolmaster leaves the Inn, soon followed by the Parson, who does not escape the ribald remarks of his parishioners in the inn.
Act II, scene 3
On the way home, and slightly the worse for drink, the Schoolmaster imagines a sun-flower waving in the breeze is Terynka. In fact Sharpears is hiding among the flowers and causing them to move. When he hears the Parson coming, the Schoolmaster leaps over the fence to embrace his beloved. The Vixen runs into another bush and her bright eyes shining out from it remind the Parson only too strongly of the gipsy. A shot is heard from the Forester’s gun – he is on the trail of the Vixen – and at the sound both men and the vixen scamper off, but not before the Forester has taken mark of the situation of all three.
Act II, scene 4
The Vixen is courted by the glamorous Goldenmane, prince of foxes, who woos her with a piece of rabbit and eventually enters her hole with her. The Owl takes great interest in their goings-on and comments freely when Sharpears rushes out in great distress and demands to be married at once. The scene ends with all the animals making merry at the Foxes’ wedding. 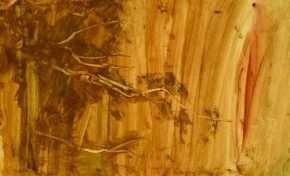 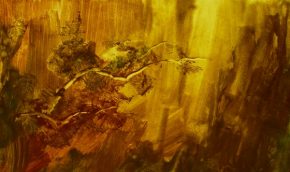 Act III, scene 1
next year
The two foxes and their six children examine the corpse of the hare which they decide has been set as a trap by Harašta, the poacher, who has already informed the forester of his approaching marriage with Terynka. Harašta returns to the scene with a full game bag, and Sharpears decoys him away while her husband and the children make off with his bag. When he picks up his rifle she deliberately draws attention to herself to protect her family. In spite of leading him astray, he shoots her and she lies dead.
Act III, scene 2
The Schoolmaster, who doesn’t feel like drinking, and the Forester, who has no one to play cards with as the Parson has left, are sitting in the Inn Garden. The sounds of the marrymaking at Harašta’s and Terynka’s wedding are heard from the other end of the village and this depresses the Schoolmaster unbearably. This does not go unnoticed by the Forester who had not realised how deeply his affections were involved. The inkeeper’s wife informs them that Harašta has given Terynka a fox-fur muff as a wedding present, and the news is a blow to the Forester who had followed her trail to her lair and could not understand why it was empty nor what had become of her. In a very bad mood he leaves the Inn.
Act III, scene 3
next spring
It is Spring again and the Forester comes back to the spot where he had lain down in Act One and wonders at the beauties of Nature and the miraculous cycle of life. He is asleep again when the animals from the first scene appaer, among them a Baby Frog and one of Sharpears’ daughters. In his dreams he sees them all and comments nostalgically that the vixen is just like her mother. Once again he is awoken by the frog jumping an his nose, but this time he is caught. The Frog informs him that it was his grandfather who did the same thing before, and that he had been told about the Forester.