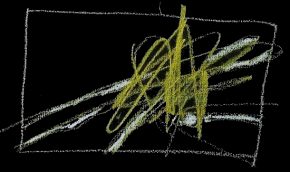 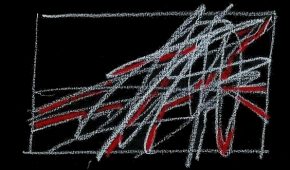 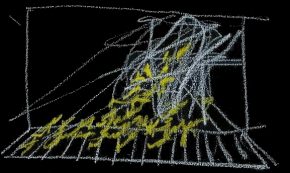 Preliminary sketches for the set
from a tableau of ten drawings, crayon on black construction paper
dimensions of entire tableau: 25 x 32.5 cm; 9.8 x 12.6 in 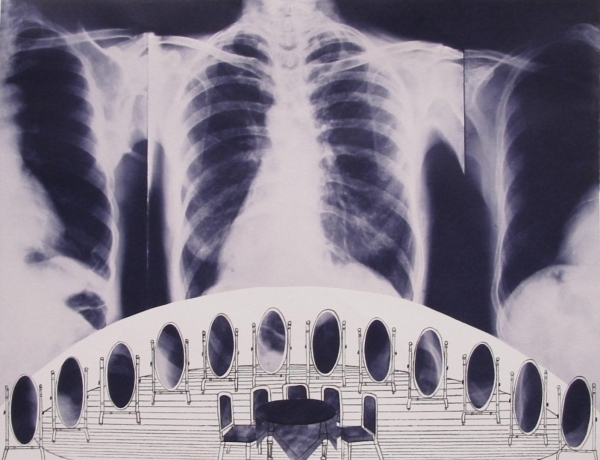 Barry Kay’s Métaboles model, consisting of group of chairs placed around a dining table and arranged within a peripheral crescent of oval cheval glasses, is dominated by a cycloramic background of three enlarged backlit reproductions of human chest X-rays. The stage set was built according to this model, accompanied by Kay’s sketches and semi-technical drawings. To facilitate the backlighting on stage, the X-ray images were painted on gauze.

In an effort to retain the X-rays’ subtle tonal nuances as realistically as possible in a two-dimensional design, Kay opted for a combination of a photomechanically produced mezzotint and a hand-drawn lithograph, instead of creating a customary drawing. Although he already conceived the idea of making the print at an early stage of designing the production, the theatre’s set deadline for submitting his ideas only allowed him to pursue the elaborate and time-consuming printmaking process after the première date.

Four months later, on 20 March 1979, Kay published his limited print edition in time to coincide with the presentation of a cross selection of his designs at the opening of an exhibition – Four MacMillan Designers – prepared by the Decor Gallery, Knightsbridge, London.